We all know the power of freshness. Whether it’s the taste profiles from using only fresh ingredients in foods or drinks or the feeling you have putting on a fresh pair of new shoes.  The difference is supreme. 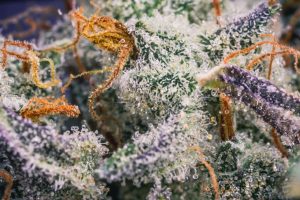 The same is true in the world of cannabis. Our Live Resins are produced from Fresh Frozen cannabis, only grown under our roof, with the highest standards of quality. The three main ingredients we as human beings are seeking in our favorite strains are cannabinoids, terpenes, and flavonoids. Each comprises a share of the 200+ active compounds discovered in modern cannabis and each plays a vital role in what we love from this plant.

These 3 compounds are the most important pieces when smoking or vaping any form of cannabis. While some are unique to marijuana itself, others are found widely in nature.

Cannabinoids are most commonly understood on a base level, with most people having an understanding or at least hearing of THC and CBD. These are 2 of the 8 primary cannabinoids (check out Leafly’s post on the others)  produced by cannabis. These acids interact directly with each human endocannabinoid system (ECS). This biological system is made up of endogenous lipid-based retrograde neurotransmitters, designed by our co-evolutionary history with this plant to express effects through the central nervous system, the brain included.

Few cannabinoids get you “high” but all play a key role working together, kinda like each individual musician in an orchestra symphony.

Terpenes are found to be more and more important in the expression of certain cannabinoids, especially the coveted THC. These secretions come from the same glands that create cannabinoids and responsible for the unique sensory characteristics like pine, gas, berry, and citrus. These have been evolved by nature to not just attract pollinators in wide varieties of plants, but to also fight against predation. While more studies need to be conducted, it is safe to say that terpenes provide uniqueness to each strain’s flavor and behavior in the body. 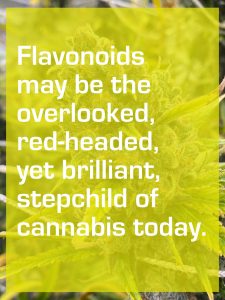 Like terpenes, Flavonoids are also widely found in nature. Thousands have been identified by scientists who see their role in fruits, vegetables, and flowers, yet some are found to be unique to cannabis, aka cannaflavins. Flavonoids play a key role in delivering the unique taste and aromatic characteristics of each strain, even being found to affect the color and pigmentation similar to other flowers in the biosphere.

Similar to terpenes again, these are pharmacologically active compounds that are known to create antioxidant, anti-fungal, and other health benefits. Time will surely bring more research on this key compound.

A Tale of Two Flowers: Cured Resin vs. Live Resin

Our flower takes one of two paths at the point of harvest here at High Grade Headquarters. The first and most common route is our detailed dry cure process. Here, buds are cut down and go through a drying and curing process that prepares buds for potent, smokable, flower, or readies it for “cured resin” extraction in the laboratory. This produces the most common concentrates and oils.

The second is the basis of our Live Resin production and is referred to as “Flash Freezing”.

In the Flash Freezing route, we cut down living buds, still on the stalk, and flash freeze them with the highest food-grade standards and equipment. This is then held at -10 degrees, and deemed “Fresh Frozen” material, ready to go to the lab for extraction.  The process of freezing these buds preserves more cannabinoids, terpenoids, and flavonoids from its living state, some of which can be killed off during the process of drying and curing.

The preservation of these 3 compounds through this Fresh Frozen process translates to higher quantities present in the end result, extract form.

That means more vibrancy in flavor AND effects from all Live Resin concentrates.

Simply put, staring with fresh frozen buds as a “starting matierial” going into the extraction process, comes out with concentrates richer in cannabinoids, terpenes, and flavonoids. This means more prevelent tastes and effects accross the board.

Reach Out To Us On Social Media